We had our last guests leave for the 2018 season at the end of October and the lake record was broken again on the final week.

Paul banked this stunning near leather at a weight of 53lbs temped on a lake special boilie topped off.

It marks a great season for us at Oakwood Fisheries where we were waiting for some of our high forties to break the 50lb barrier.

Brutus was first to break the 50lb barrier earlier on in the season and now Heather his sister has also pushed through the magical 50lb barrier at a new lake record of 53lbs so we now have two fifty pound plus carp at Oakwood Fisheries and hopefully more will follow in their foot steps 2019. 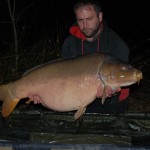