Month Of May Produces Excellent Results

May has been a great month this year with temperatures staying fairly cool and constant with no heat waves yet.

The lake produced 40lb plus carp every week for almost a month, bought to an end the week Josh visited but he only missed out by ounces as his best fish was 39lb 6oz mirror and I must say he had a great week returning to Oakwood Fisheries for the second time and set many junior records including biggest junior fish and most overall weight as he took 13 carp between 22lb – 39lb 6oz – with 2 doubles and also lost 7.

Paul fishing with his son Bradley,visiting for the first time also deserves a mention as he banked a brace of 40’s and son Bradley got a fish shower great picture!   Father and son team Mick and Lee had a great trip banking a new PB 40 mirror and 6 x 30’s and 5 x 20’s.

There has been many 30’s caught and a few visits to the bank by some of the harder to catch residents. No grass have been caught yet with the lakes resident biggie at over 50lb still evading capture.

I was pleased to see some old friends as some of the much sought after linear’s  were banked including one which has not been caught for 4 years at a new highest weight of 36lbs along with a couple of stunning fully scaled mirrors.

The average fish weight is also raising nicely with the average topping 30lbs which has risen well over the last 5 years of lake management and above all they are still in great condition for everybody to enjoy. 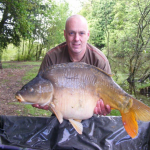 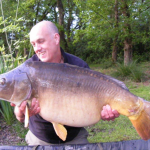 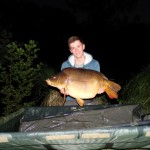 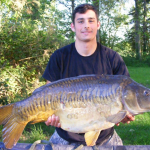 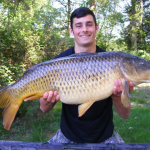 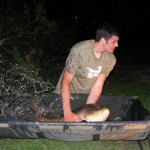 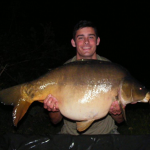 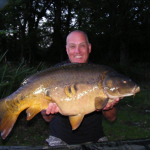